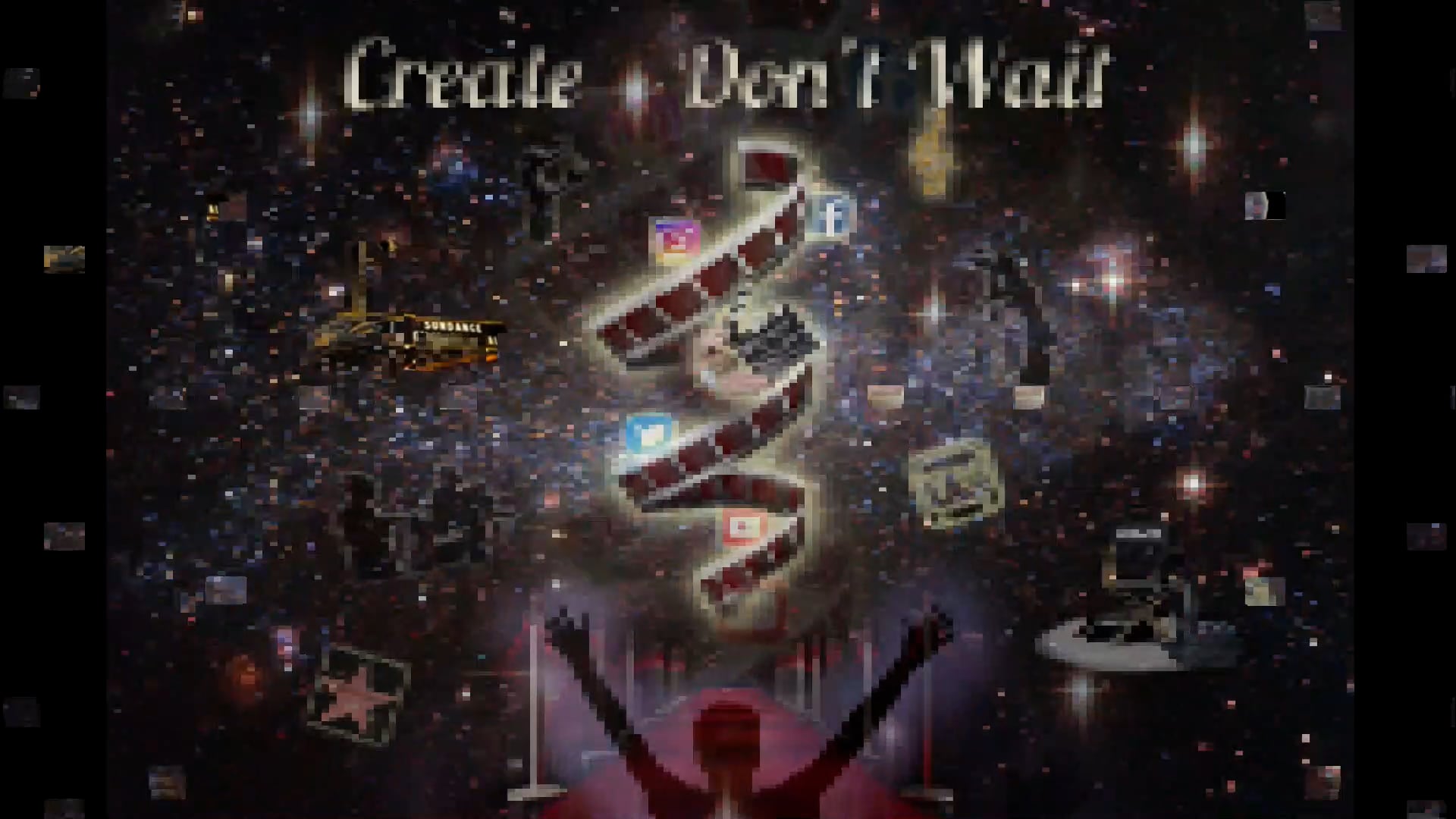 We are committed to telling important stories through all forms of media about social change,  underserved communities, silenced voices, and unspoken truths. Giving a platform to not only women, black, latino, and LGBTQIA+ filmmakers but all powerful artists with something to say.

Our mission at Create Don’t Wait is to dispel the myth that Hollywood only exists in big-budget studios. And making movies and TV can only happen with big-name movie stars and producers with millions.

Your success in Hollywood isn’t because someone else said you could have it. It’s because you create it.

It's time to create!

Are you a creative trapped in the pressure-filled demands of a day job? Are you shut down from the unending restraints of the office and the flatline energetics of doing the same thing over and over?

Produce your own content -- What are you waiting for!

The power of Hollywood and how to become a success is no longer held by lock and key somewhere behind the gates of the studios. If a movie made on an iPhone can win an Oscar... so can you!

There are so many talented filmmakers out there.  From camera operators to make-up artists, but where do you find them? Who do you trust? Who will actually do what they say they'll do?

The competition in Hollywood is unparalleled by anything anywhere. Where do I start? Or... how do I sustain the energy in this forever-changing social media-based town!?

Create a network of winners & find your people

Be careful with all the pay-to-play. Classes are good to take but learn to recognize the empty promise. You can go broke real fast. Be smart, listen to your instincts, and trust yourself. Just because it looks good doesn't mean it's real.

Fear can be a powerful emotion and it can disguise itself in many destructive ways. Fear can also be something to use as a force of energy to propel you to your highest potential. Keep your fear in front of you, that way you'll always know what's ahead of you.

A Film Noir Style Music Video "Me and Mr. Jones"

In this 1940s Film Noir style music video, the 1972 Grammy award-winning soul song about marital infidelity, tells a cinematic drama about a forbidden romance between two men who meet (as the song says) “every day at the same café.”

In this version, their provocative rendezvous tell a very real and dangerous story about hidden love and the underground world of LGBTQ+ cabaret performers. AND, sometimes secretly intertwined with the violent world of gangsters and crime.

After years of repressed shame and pushing it all away, a man is confronted with the truth of his fears when the past shows up and challenges him to fight back.

Have you ever harbored a secret desire to do or become something but wouldn't allow yourself to do or be it? Maybe there were circumstances in your situation that wouldn't permit it but regardless, you were committed to finding a way. So, what's the harm in a little lie? Right?

At the end of the 20th Century, Chris, a gay man who like many of his contemporaries was still awkwardly maneuvering his way through the obstacles of the AIDS crisis. He was also unsuccessfully fighting off a family legacy of alcoholism and holding tight to a belief system steeped in toxic shame.

When the story picks up, it is the present day. Chris is sober and one of many AIDS survivors living today who were once in the epicenter of the disease, but for no explainable, scientific, or otherwise, reason never contracted the disease. Life is pushing Chris into unknown and frightening territories when a lie he told many years earlier resurfaces as the exact manifestation and now stunning truth of what his life has become. It exposes how he has eroded his relationships, career and turned himself into a shell of a man.

Chris, like a feral animal desperate to escape from captivity, finds himself in the center of his cynical life unwilling to love or be loved. For the first time, he sees how everything has been in coordination with his lie.

Memories from his youth taunt him in blistering nightmares and begin to interlace his adult life with his abusive past. As he stands face to face with what his lie has become, desperation and shame brings him to a self-shattering realization in the midst of a life threatening tragedy.

All of this is accompanied by visits from a fantastical yet dark, monstrously ominous Winged Centaur who uproots his entire belief system forcing him to look at the truth.

A note from the screenwriter.

During the last thirty years of the 20th Century, the LGBTQ+ people emerged proudly out of their respective closets fighting for civil rights and rewrote the history books. While that was happening a serial killer stocked gay communities and killed with relentless animosity. The killer was AIDS. That said, it’s hard to tell a story about the surviving LGBTQ+ folk today without some residual of that still ongoing and UN thwarted human tragedy. This story is no exception.

In these current times full of political volatility and civil unrest, it is more important than ever we continue to stand up and tell our individual and community stories. It is paramount that we never stop demanding our basic and most fundamental birthright here in America, equality.

We believe here at Create Don't Wait, regardless of what might appear to be more powerful on the opposing side we must remain steadfast in our mission to tell stories about the LGBTQ+ community without any excuses or explanations why.

EVERYONE has a story!

Every person/family/community/neighborhood/culture has a voice that must be heard. We are committed to telling those stories and keeping diversity and individuality alive and thriving. In today's world, like it or not, we communicate and depend on electronic devices to learn, teach, and even love.

We are a multi-media production company producing film, TV, internet, music, and theatre. We also cross-pollinating with all new entertainment media trends.

We promise entertaining, inspiring, and healing content. We remain committed to diversified production employment and casting with a priority to give voice to underserved communities.

Let's shoot it! Yes, of course it's that easy.

Imagine... all you have to do is say it and then do it.

How often in your life does that happen?

We can help you bring your idea to life

Drop us a line and let us know what you're thinking.

We are forever committed to creating a diverse environment and proud to be an equal opportunity employer. Anyone seeking employment from Create Don’t Wait will receive consideration without regard to race, color, religion, gender, gender identity or expression, sexual orientation, national origin, disability, age, or veteran status.